This "Blonde" is Gold

With a sorority, a salon, a murder trial, #meToo, two dogs, two proposals and a massive Irish line dance, the story is almost too big for one night. But it was told in dazzling fashion by Fremont Street Theater Company as Legally Blonde, The Musical opened Friday at Cutting Hall in Palatine.

Based on a character from an original novel made famous by the 2001 film, Legally Blonde follows the journey of Elle Woods, a Delta Nu from Malibu, who evolves into a scholar and an unlikely legal genius.

It's a great leading role for Sarah Inendino (herself a doctoral student and music educator) in which to portray such a powerful combination of fashion, femininity and intelligence. She was fearless as Elle, tackling the lioness's share of singing, dancing and acting through numerous costume changes. 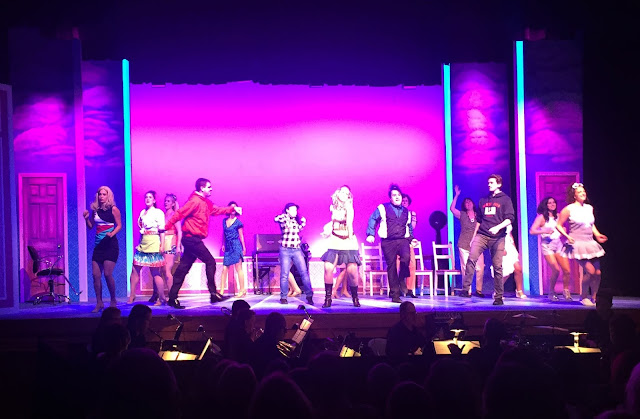 But the talent ran deep in this cast. In huge ensemble numbers with more than 20 people on stage, every artist was performing fully and consciously from head to toe. There were no mezzo-forte moments on this night: just a fortissimo fire hose of music and movement, electrified by outstanding costumes, lighting and set designs.

With vocal mics optimized for straight dialog the sung lyrics were hard to follow at times, but even if you don't already know this contemporary classic story you'll be blinded by the sheer spectacle of beauty and professionalism in this show.

Our favorite standout performance was by Jessica Means as Paulette, a salon stylist with high heels and a Boston accent who outperformed all the other tech and talent in the hall with bold and melodious solo lines and endearing comedic flair.

(The men in the show weren't bad either.)

Powered by a cast and crew numbering into the sixties — plus an 11-piece live orchestra — it's an astonishing production by Director Madeline Franklin, whose vision for this audacious, nonstop musical juggernaut seemed to come together flawlessly in front of a sold-out audience.

Tickets are still available for its second weekend, but act quickly because only three performances remain, September 13 and 14th at 7:30pm and September 15th at 3:00pm. Go to cuttinghall.org or fremontstreettheater.com.
Posted by Jeffrey R. Pierce