The last concert of any choir's or orchestra's season is often the best, because the musicians have completed a full eight months of development, individually and together as an ensemble. This was evident Sunday as the Elgin Master Chorale and the EMC Children's Chorus concluded their season at the ECC Arts Center.

The nineteen-voice Children's Chorus showed the courage of a group many times its size in taking on an incredible variety of material, sung in three languages and almost entirely memorized. Sacred and traditional songs were combined with modern tunes arranged with tricky key and meter changes and subtle harmonies. The high point was possibly "Tcho tcho losa," a South African call-and-response folk song delivered with authentic tone and technique — entirely a cappella.

The quality of the music was matched by the singers' confidence and professionalism. Managing Director Becky Narofsky is an enthusiastic and skilled artist-educator whose work with this group is clearly reflected in their sound and presence on the stage.

Joined by members of the Elgin Symphony Orchestra and guest instrumentalists, the Elgin Master Chorale presented the forty minute Requiem, Op. 9 (1947) by Maurice Duruflé (1902-1986). This impressionistic nine-part Mass for the Dead, well known in the choral repertory, was new to many in the audience and on stage.

Conductor and Music Director Andrew Lewis introduced the composer and the work in opening remarks, in a lecture-recital style that is appearing more and more in the concert hall. But this didn't soften the wonderful surprise of the first few moments of the Mass's Introit. This is very different from other works you've heard bearing the title "Requiem."

Ancient sacred Gregorian chants supplied the modal palette that gives this music its ethereal quality, avoiding the usual emotional interpretations of major or minor keys. The orchestra, augmented by organist David Schrader, produced sounds and textures that defied explanation at times, adding to the experience of being between worlds.

The power of more than one hundred voices was restrained and reverent throughout most of the Mass, but the full-throated delivery of "Hosanna in excelsis" ("Hosanna in the highest") or "judicare saeculum per ignem" ("to judge the world by fire") moved one's spirit in quite a different way.

Soprano soloist Katherine Wells gave a radiant delivery, and in the mezzo range her voice took on a modernistic tone that complemented the piece nicely. Maestro Lewis was clear and confident at the baton and elicited a powerful interpretation from the combined forces of more than 150 musicians. 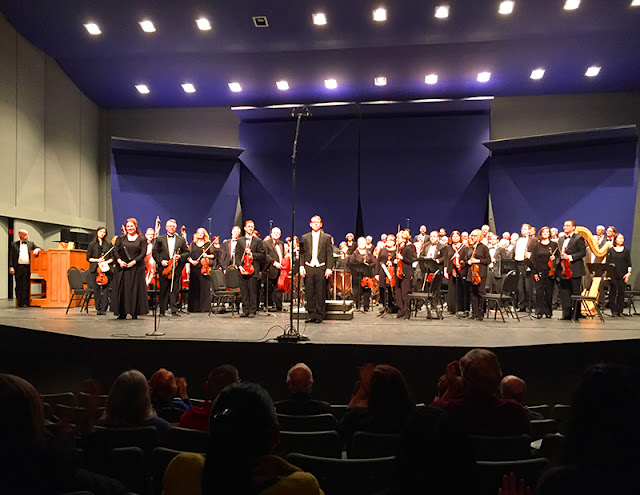 With each passing season, these Elgin Master Chorale collaborations prove to be more than just a choir concert — they are significant art events. With this score and the voices assembled on the Blizzard Theatre stage, this performance made us forget what city, what century or what plane of existence we were in, and there is truly nothing more that can be asked of any concert.

For more information on the Elgin Master Chorale and the Children's Chorus summer programs, visit elginmasterchorale.org, emcchildrenschorus.org, or call (847) 214-7225.
Posted by Jeffrey R. Pierce No comments: