One could argue that the regenerative cutting edge of music has always been pushed by people under age thirty. As evidence, one might offer up the Elgin Youth Symphony Orchestra's March 12th concert, "By the Waters of Babylon: Music of Exile, Longing, and Home."

Integrating projected imagery, a folk revival era soundtrack, and a timely thematic agenda, this concert was more than just a student recital: it was a powerful statement about music as part of a holistic human experience of seeing, listening, feeling, thinking and creating.

A massive orchestra filled the stage and side loges of ECC's Blizzard Theatre to perform Verdi's "Va, pensiero" from Nabucco (1841), arranged for the EYSO by Artistic Director Randal Swiggum. A four-piece percussion ensemble performed groundbreaking "Double Music" (1941), written by a teenage John Cage and a very young Lou Harrison, who dared us to question the limits of musical language.

The elite Maud Powell String Quartet played the spiritual "Deep River," arranged by Robert Hanson, former Music Director of the Elgin Symphony Orchestra and Founding Conductor of EYSO. This was followed by a premiere of "On the Gravity and Crisis" (2017) by twenty-something composer Ethan Parcell, whose unconventional process shifted substantial creative responsibility to the Earl Clemens Wind Quintet.

All of this represents relevant contributions to our ongoing musical discourse by young people, local people, and living artists who have not yet finished creating.  As for the players, each one's individual musicianship often surpassed the cohesion of their ensemble, but at this level it's hard not to judge by professional standards.

To his credit, the same might be said of Associate Conductor Matthew Sheppard. Throughout the kaleidoscopic mashup of Verdi's "Overture to Nabucco," his baton transmitted dramatic direction with affect and energy like a seasoned maestro.

The taut, simmering Third Symphony (1944) by Bohuslav Martinů was a well-rehearsed and impressive finale. It was the debut performance of Martinů for any Elgin audience and quite possibly a first for any youth orchestra anywhere.

The venue, the music, the scholarship, the beautiful program booklet (by itself, worth the price of admission) — everything at this concert was first rate, except the size of the audience. This conservatory-quality organization deserves to be heard by more than just loyal friends and families; Elgin's larger community of arts patrons need to discover what they've been missing.
Posted by Jeffrey R. Pierce No comments:

Five years was worth the wait to finally see the Independent Players' excellent production of Eleemosynary (1985) by Lee Blessing. The unlikely title is a deep dictionary word so recondite it gets in the way of its own meaning and usage. It's a perfect metaphor for the flaws of three generations of women whose preoccupation with arcane knowledge has taken the place of understanding themselves and maintaining meaningful relationships. 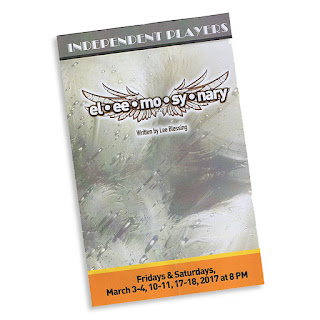 A near-capacity audience was seated on two sides of a minimally set space at the Elgin Art Showcase Saturday, as the action shifted fluidly through interconnected moments of narration and dialog anchored to impressions of place and time. The talented cast was well directed to maintain such continuity through the excellent non-linear script.

The overall skill and professionalism of this production was epitomized by Marge Uhlarik-Boller as grandmother "Dorothea," a free spirit whose frustrating formative years evolved into a fascination with theoretical possibilities. Her colorful delivery was perfectly timed to inject comedy that often carried, like the play's abundance of obscure words, layers of embedded meaning.

Dorothea's daughter "Artemis" — from the Greek goddess of wilderness and the hunt — was played with tangible complexity by Lisa Schmela. Her stage movements and body language brilliantly decoded the references in Artie's words: she is always seeking relief from her multiple "attachment disorders" by immersing herself in biochemical research and moving from place to place.

Sarah Bartley played Artie's daughter "Echo," a precocious chatterbox (raised by Dorothea) whose source of joy, object of love, and purpose for living is to know the spelling and definition of every word in English. The frequent spelling recitations and sheer number of words make this role challenging, but far from one-dimensional.

Echo covers the greatest range of all, from infancy through childhood, and on to maturity in a powerful role-reversal in the closing scene. Like her loquacious, mythical namesake, words were at times an emotionally obstructive handicap, and Echo's voice indeed reverberates with the quirky tendencies of her two mothers. But Dorothea (meaning "God's gift") is the prophet of the family as she repeats, "It's a terrible desire to want to know everything."

This ensemble did an amazing job of creating surprisingly relatable characters in vignettes that often consisted of six-syllable words, one-sided conversations and imaginary props. After 39 years, the Independent Players have not lost the knack for assembling together wonderful actors, directors and scripts.

Eleemosynary, directed by Larry Boller, continues for one more weekend, March 17-18 at 8 p.m. at the Elgin Art Showcase.  Tickets are available at independentplayers.org or at the door.
Posted by Jeffrey R. Pierce No comments: