"It's a very dangerous thing to listen," says Sir Robert Chiltern, the leading man in Oscar Wilde's 1895 play An Ideal Husband. It's but one of hundreds of witty one-liners that speckle this long, wordy script considered one of Wilde's best.

But listen you must, to the vivid characterizations, hilarious contradictions, and covert social observations.

This stalwart cast carried off the four act play with gentle and believable London accents that never distracted, and reeled off sparring dialogues with nary a flubbed line. Slowing the tempo to savor this language would have pushed the play to four hours — a bargain wisely not taken.

Greg Waldyn was brilliantly cast as Sir Chiltern, the flawed and flustered politician with something to hide. Katie McClatchey played a convincing Lady Chevely with a palette of colors — never muted, and sometimes just a tad dark for the upholstery.


Among many strong performances, Katrina Plonczynski stole a scene as Lady Markby with a delightfully elastic, bombastic delivery. Jamie Ewing brought depth to the two-dimensional Mr. Goring, "the most idle man in London," with his conceited Victorian mansplaining.

You won't notice a little static noise from the P.A. during these scenes of parties, ex partes, and prattles as the Lost Art of Conversation is gloriously revived.

But George Bernard Shaw was right in saying Wilde is "our most thorough playwright; he plays with everything," including props, visual situations and stage movement. Director Rachel Stevens handled this word-heavy script nicely, with just the right amount of action and set design to complement the brilliant writing: exactly what's necessary, and no more.

Set against a plot of political games(wo)manship, the play examines the politics of relationships and the unavoidable hypocrisy of defining ideals in a fallible human society.

An Ideal Husband continues through March 1st at the Elgin Art Showcase, 164 Division Street in downtown Elgin, with shows at 8pm Thursdays thru Saturdays, and 2pm Sundays. For tickets and further information, go to goodlycreatures.com.
Posted by Jeffrey R. Pierce No comments:

The service is first class in this amusing hotel farce in which two pretentious divas are booked into the same suite. It has all the gasping, door slamming and misdirection you'd expect in this classic comedic genre, populated by stereotypes so exaggerated that the roles almost play themselves.

Gabor Mark (Bernard S. Dunlap) portrayed a heel-clicking yet beleaguered hotel manager with an amazing repertoire of attitudes and affects as he exchanged lines with his VIP guests and his fumbling, ingratiating staff.

Casting by Director Julie Price was superb, as the supporting actors all turned in boisterous, over-the-top, physical performances in parts that were nearly impossible to overact. 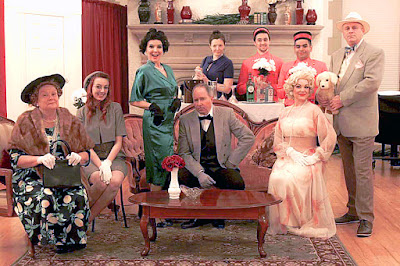 Suite Surrender is an excellent choice for the Elgin Art Showcase with its high ceilings and grand piano, set up with vases, velvet, and vintage decor that perfectly evoked the extravagance of a bygone era. Though the script may not break any new creative ground, its familiar trajectory is punctuated by a clever plot twist. No spoilers here!

Cross your fingers for another wardrobe malfunction — it's just the sort of unscripted element that perfects a comedy like this, in the hands of such skilled actors.

The show continues through February 9th at the Elgin Art Showcase, 164 Division Street, Eighth Floor, in downtown Elgin. Shows are Fridays and Saturdays at 8pm and Sundays at 2pm. For reservations or more information, call (847) 741-0532, email tickets@inil.com or go to elgin-theatre.org.
Posted by Jeffrey R. Pierce No comments: