Just like Italian food, Over the River and Through the Woods is savory and easy to swallow. The two-act play written by Joseph DiPietro and performed by the Elgin Theatre Company opened Friday night at the Elgin Art Showcase in downtown Elgin.

The grandparent-grandchild relationship is the lens through which this plays looks at life's priorities. For the older generation, it's faith, family and food. "Tengo familia" ("I have a family") is the cherished tenet of two sets of grandparents, whose grandson's career ambitions are threatening to take him thousands of miles away.

Though the thermostat is always set too high in Grandma's house, the characters are comfortable — with themselves and each other — and the situations seem familiar. The cast seasoned their portrayals of Italian-Americans from New Jersey with subtle accents, manners and costume to make them very believable and likeable. 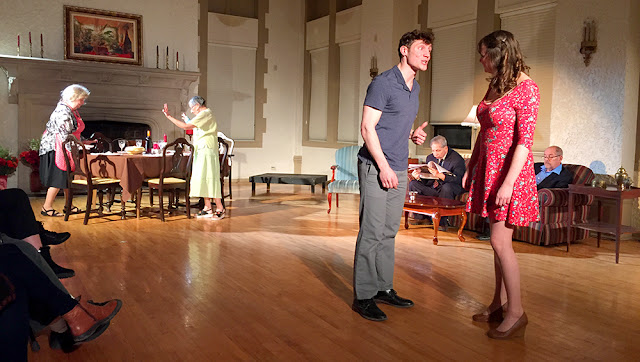 Tom Ochociniski and Linda Sak play Frank and Aida Gianelli, whose kitchen is always open and table always has room for one more. Richard Johnson plays Nunzio Cristano and Arlene Arnone plays Emma, who tries to fix her grandson up with a nice local girl Caitlin, played by Jess Smith. The scenes flow like a sketch comedy with plenty of laughs.

Grandson Nick Cristano, played by Matt Hellyer, is at the center of the plot tension. On one side, he's the reason for his grandparents' fear of detachment; on the other side, he's the object of Caitlin's fear of attachment.

This family's style is more words than action, and the cast wasted no time delivering the next line. True to her character, not even a broken wrist could stop Arnone as Emma from talking with her hands.

With highly effective lighting and sound by Andrew Murschel and excellent casting and coaching by Director Richard Pahl, this production was like a fine lasagna: a little cheesy, just enough meat, and definitely warm and satisfying.

Enjoy a little theatrical comfort food! Over the River and Through the Woods runs for three weekends, through February 24th. Shows are at 8pm on Fridays and Saturdays and 2pm on Sundays. For tickets and complete information, go to elgin-theatre.org or call (847) 741-0532.
Posted by Jeffrey R. Pierce No comments: