An organization that relies on command and control in order to function is supposed to be free from drama. Aaron Sorkin's 1989 play A Few Good Men proves that drama can't be avoided within a closed society where men are trained both to cooperate and to fight.

In their last production before merging with Woodstock Musical Theatre Company, the Town Square Players casted 22 actors into nearly 30 roles to perform this powerful two act play Saturday at the Woodstock Opera House. Beginning next season, the two companies will combine to become Theatre 121.

The army of actors displayed military precision in their crisp movements, timing, entrances and scene transitions, but they were not a machine without a soul.

In crucial scenes, Jamie Ewing (Jessep), Derek Hyrkas (Kendrick) and Chris Griffin (Markinson) skillfully revealed the humanity of their characters with body language and accent, even in moments of half-shouted Marine-speak.

Anthony Walker (Dawson) and Nate Kirk (Downey) argued the value of individuality within a unit by portraying distinct characters whose loyalty is a choice based on emotions. It was part of a complex picture of Marine Corps life where standing perfectly still alternates with extreme physical exertion.

Adding to the authenticity of every well-cast role was superb costuming, haircuts and just the right amount of prop and set design. 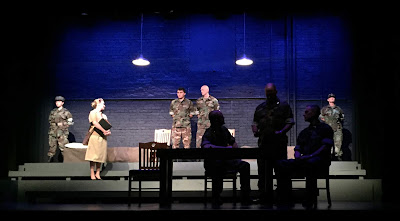 Subdividing the space of a single stage into multiple storytelling zones is a signature style of director Madeline Franklin's creative vision. Her layering of time and space with foreground and background action, cued by lighting, raises the art to a level beyond what can be noted in a script.

In a leading role made famous by Tom Cruise, Trevor Wilson brought Navy lawyer Daniel Kaffee to life with endearing smugness that gave way to sincerity and conscience; he delivered a clear counterpoint to the rigidity of military society.

Tania Joy brightened every scene with a nuanced performance as Lt. Cmdr. Joanne Galloway, who was never entirely predictable. Her chemistry with Wilson was like a keg of gunpowder: dangerous if it were to explode.

Visiting the beautifully restored Woodstock Opera House is worth the trip, with its art gallery and historic interpretations, but seeing live theatre as it's meant to be seen makes the experience truly authentic.

A Few Good Men continues through June 30th, with shows at 8pm Fridays and Saturdays, and 2pm Sundays. For tickets, go to woodstockoperahouse.com or call the box office at (815) 338-5300.
Posted by Jeffrey R. Pierce No comments: