Set at an elite New England campus, the play explores the psyche of English Professor Laurie Jameson, an ultra-liberal academic with hardened views of gender, race, privilege, public policy and social status. When she meets an incongruous freshman who doesn't fit her theory of society, she endures two semesters of cognitive dissonance that confirm for us multiple ironies of the human experience, among them, that we tend to exemplify the very qualities that we condemn in others.

Lori Rohr plays Jameson with just the right haught, in prickly spars with her family, colleagues, and students.  Her quick head turns and flashing eyes project the arrogance and prejudice that Jameson can't see in herself, and crucial lines like "I shouldn't be here" (in therapy) and "I still know what I know" are bold-faced code words that signal her self-segregation from a larger, more complicated society.

Woodson Bull, III ("Third") is Jameson's freshman foil and in the title role, Wasserstein's artistic subject (though technically the antagonist) is portrayed stalwartly by Benedict Slabik II. At times awkward, and other times wise beyond his years, Third is an undersized wrestler who grapples with forces larger than himself, but ultimately settles for a draw. The wrestling subtext is clear and well-placed, but perhaps necessarily underdeveloped.

The plot revolves around a term paper writeup of Shakespeare's King Lear, and Wasserstein cleverly employs references to Wilder's Our Town and Austen's Pride and Prejudice as thematic devices throughout the play.  Jameson's aging and demented father Jack, played skillfully by Richard Westphal, is the image of Lear as a confused father, perfected (in a dance) by Third's own theory of the sublimation of desire.

Excellent performances by Molly Wagner (daughter Emily) and JoAnn Smith (Professor Nancy Gordon) add flavor to this well casted five-member ensemble, playing crucial scenes that deepen and advance the plot. Very careful touches by Director Larry Boller, like playing backs to the audience, and shaking or not shaking hands, did not go unnoticed.

With lights and audio on point, and the friendly acoustics of the Elgin Art Showcase helping lift every line, this play can't miss.  Listen carefully for the antecedents in Act One, and you'll relish every masterful dramatic cadence in Act Two of Wendy Wasserstein's final play.

Third continues May 21, 27, and 28 at the Elgin Art Showcase.  Go to www.independentplayers.org for more information.
Posted by Jeffrey R. Pierce No comments:

Awash in colored lights, the Hemmens stage looks great and the sound is excellent when the mics are turned on.  The band tore up Kenny Dorham's Short Story to open the set — and set the tone for an audience who might be more familiar with Beethoven than bebop. Jerome Richardson's Groove Merchant was taken to the next level as guest trumpeter Dave Katz displayed his amazing chops with a left hand mute technique.

Bandleader Mark Bettcher busted out a trombone solo on Joe Henderson's classic Recorda Me, and then treated the house to a hip and fearless vocal on a favorite ballad, Angel Eyes by Earl Brent & Matt Dennis.

The Reunion Jazz Ensemble is a twenty-piece band of accomplished musicians that includes seasoned veterans and up-and-coming stars who all play like pros. Most of them took solo turns at the mic and swapped parts throughout the evening.

But they played like a whole new band after the intermission, as trumpet legend Marvin Stamm took the stage.  The woodshed was clean, the rhythm was locked, and the brass was so tight it sounded like one player blowing fourteen horns.

Stamm's mellow, unlacquered tone carried beautifully throughout Lars Jansson's The Flyfisher, and Jobim's Quiet Nights opened and closed with Stamm playing off guitarist Bill Kadera like he had eyes in the back of his head. Scampering poetically around the midrange in long and short phrases, going dark, scooping into lip trills, the notes came from a deep and subtle language that few can speak, but all can understand.

Bettcher brought some more heat on Cole Porter's I Love You, and tenor sax standout Matt Muneses played well beyond his years on more breaks in the second set.  Drummer Brent Jordan was cooking the whole time and dished some fiercely abstract licks as the night went on.

Yet a legendary musician like Marvin Stamm is more than just performance — he brings the wisdom of an artist to any discussion. In his extemporaneous remarks between numbers, he reflected on the importance of arts education, pointing out that playing in a band teaches us how to function in a community: to pursue individual excellence and also come together in service to a whole that is greater than the sum of its parts.

Sammy Fain's Secret Love closed out the show with Stamm and Katz together, in an amazing display of distinct tonal colors and styles, exchanging questions and statements with the force of two politicians and the grace of two dancers.

Truly, Elgin needs more jazz. America's cultural gift to the world is now a world language, and it needs a revival anywhere that people want to expand the common ground.
Posted by Jeffrey R. Pierce No comments:

Pianist Rachel Elizabeth Maley presented a 60-minute recital of works by Philip Glass and J.S. Bach to raise funds for three local human services charities Sunday at St. Patrick's Church of St. Charles. Conceived as a program exploring compositional parallels, to us it was realized as a program of intersections, or incongruities.

St. Patrick's is a light, spacious and beautiful building whose muted earth tone interior is decorated with stark contrasts. A few human likenesses are surrounded by overwhelming patterns of rigidly ordered geometric forms. In the stained glass windows, the human figures are intersected by shapes with dark, heavy boundaries. We leave the interpretation to you.

In the midst of these visual tessellations, Maley explored the non-melodic motifs of Bach in a slow movement from the Italian Concerto (1735), Partita No. 1 (1726) and Toccata in E minor (1706). As a master of counterpoint, Bach displayed an astonishing talent for building large scale works out of small materials: he could use a single four-note sequence to produce many bars of music by inverting, transposing, multiplying or subdividing it. 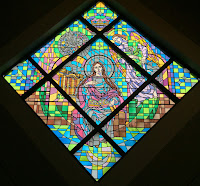 This is the parallel with Glass, whose Études 2, 3, 6, 12, 20 (written between 1992 and 2012) also demonstrate composition based on, as he puts it, "repetitive musical structures." Using a pair of alternating notes like blades of grass, his works are more like textural landscapes than melodic tableaux — colored and shaded, but abstract rather than descriptive.

Maley has combined these composers before, and the extent of her understanding was evident as she shifted easily from Bach to Glass twice without pausing. Working from a digital tablet, she "turned pages" by tapping a pedal, and executed 300 years of keyboard technique with the touch sensitivity of a pianist and the left-hand skill of an organist, varying her volume of sound independently from a volume of notes so massive they had to be performed by remembering rather than by reading. 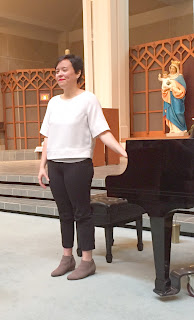 And instead of a mere exhibition of the music, this recital was an art performance in which Maley herself was the meaningful gesture against the repetitive musical structures of thousands of dots and lines. Swaying fluidly from phrase to phrase, tensing and relaxing, leaning forward, cracking a smile — her performance was beautifully imperfect and essentially human. It's an intersection of form and gesture she gravitates to in her own work, and in the images she paired with this event.

And if you knew her, you might say it's the kind of incongruity she works with every day.
Posted by Jeffrey R. Pierce No comments: