In a play about the theatre, in which actors play the roles of actors and other theatrical personnel, the possibilities for a multi-layered plot are intriguing. Where Noel Coward's Present Laughter (1939) is light on plot, it's heavy on characterizations, to which good actors will bring the best of their craft.

Directed by Don Haefliger, the Independent Players' cast of eleven seized the opportunity on opening night Friday at the Elgin Art Showcase.

In a role which Coward created for himself, Gabor Mark plays Gary Essendine, a temperamental and self-indulgent actor turned 41. Mark captures the exaggerations and peccadilloes of a spoiled British Thespian in his brilliant caricature, flinging out lines like "My entire life is one long torment, and no one remotely cares!" 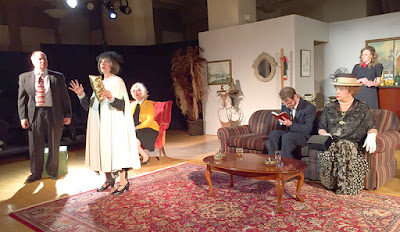 Standing out among the supporting cast was Madeline Franklin as the vivacious Joanna, a wife and mistress within Gary's inner circle. Her stage presence and delivery commanded attention in every scene she shared with the other quirky and pretentious characters.

Coward's classic script is witty and downright hilarious at times, but still richly detailed with self-conscious lines like "I'm always acting," and "Don't be affected, Gary," and "Stop being theatrical!" All of these characters — not just the actors — are profound liars in their own way, and even the hired help injects drama into the story.

But this is really an actor's play. The more experienced players' quality of entrances, body language, and diction was superb, showing just the right restraint in this barely civilized farce. Some of the accents were better than others, but they were all successful, even communicating region and social class which, along with excellent costumes, created vivid personalities.

The run time is more than two hours (with an intermission), but you won't be checking your watch with all this colorful and comedic melodrama happening just a few feet away. See it for yourself, Fridays and Saturdays at 7:30pm through March 16th at the Elgin Art Showcase, 164 Division Street. For tickets and more information, go to independentplayers.org
Posted by Jeffrey R. Pierce No comments: