St. Charles Singers: "The Mozart Journey" is the Destination

If the notes are written but no one hears them, is it still music?

The St. Charles Singers seek to eliminate that question by giving voice to the sacred choral works of W.A. Mozart, in their multi-season series of concerts that bring this neglected part of the master composer's catalog to the fore.


"The Mozart Journey XII" passed another milestone Sunday at St. Mary's Church in Elgin, as the 32-voice choir, accompanied by the Metropolis Chamber Orchestra, presented 75 minutes of choral and symphonic music from the period 1771-1779.

This youthful vocal ensemble is different from other community choirs in that it consists of highly-skilled, professionalistic musicians, including impressive soloists in every section. In some voices you hear only the training, but in these voices you can hear depth of meaning that comes from talent and experience. You can hear art.

The joy of directing this caliber of singers is evident in the smile that never leaves the face of founder and Maestro Jeffrey Hunt, characteristically unpretentious in his collarless shirt, and conducting without a baton. He let the music do the talking while never missing a cue, tempo or page turn. He conducts like copper conducts electricity: channeling it without throwing sparks or adding resistance.

In fact the opening piece, a movement borrowed from the "Posthorn" Serenade (K.320), was entirely unconducted. With the winds standing in a row behind seated strings, the performance showcased Mozart's gift of eloquent musical dialogue from the very first nod from the principal flute.

Though the layout of St. Mary's makes staging a bit difficult, the sound makes it all worthwhile. It sounds like a cathedral, with infinite acoustic forgiveness, and grace enough even for horns. The bass and tenor sections were harder to hear during the tuttis, yet the double bass resounded nicely.

We liked the exquisitely soft, lightly orchestrated sections of Misericordias Domini (K.222) where the lower voices and the portative organ could incandesce. Softer moments of the Litaniae revealed the singers' disciplined control of breaths and consonants, perfected by superb direction and preparation. The highly repetitive, all-Latin text gave them no trouble.

Despite the fact that the works on this program are seldom heard, the genius of Mozart's voice makes them seem familiar, and the craftsmanship of his instrumental Symphony No. 12 in G (K.110) is emblematic of this music which almost plays itself.

In a well-placed finale, the Regina Coeli (K.108) juxtaposed choir and orchestra in four movements that featured soprano soloist Meredith Du Bon. The choir watched and listened with admiration during solo passages as Du Bon dared to inject personality into the sacred text, and their faces expressed concentration and joy simultaneously in powerful and memorable fortes. 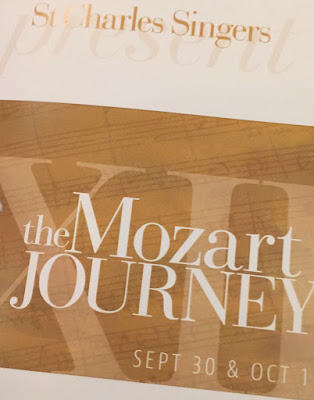 Elgin has a great appetite for the arts, and scholarship, and loves historic preservation. "The Mozart Journey" is a perfect addition to the fall concert schedule and a credit to St. Mary's Church and the Gifford Park neighborhood. We wish the St. Charles Singers would perform here more than once a year. Until then, you can hear them at Baker Memorial United Methodist Church in St. Charles for "Candlelight Carols," Dec. 1-3.  Go to stcharlessingers.com for tickets and more information.
Posted by Jeffrey R. Pierce 1 comment: