Based on The Scarlet Letter, the landmark 1850 novel by Nathaniel Hawthorne, Scarlet reexamines morality through the public and private struggles of flawed characters in a socially rigid community. The contrast between individuality and conformity is highlighted throughout, as each lead character resolves this tension through confession, repentance or spiritual transcendence.

Paired perfectly with a score by the New England modernist composer Charles Ives, the voice of American innovation is strong in the dance, which extends the neoclassical approach with elements of film and spoken word.

The company looked spectacular and mature as an ensemble, with movement that made the Ives symphonic excerpts sound like they were written just for this ballet. Each artist was distinctly expressive within collective interpretations of the public square, worship and domestic life.

Lead roles danced by Brette Benedict, Antonio Rosario and Sam Opsal were eloquent and athletic, excelling in form and detail for nearly two hours of performance. The solos and pas de deux were nicely scaled for the Hemmens stage, and the lighting and curtain work were precise throughout. The film projection would have fared better with a new lamp.

Though the swirling organza looks beautiful and the movement is on par with olympic athletes, concert dance is a language that can be learned and understood. The source material for Scarlet — familiar to so many Americans — makes this ballet accessible, and new audiences will clearly recognize that while some of us must wear a badge of shame, everyone's petticoats are scarlet.

The finest in any art form leaves you wanting more, and we would gladly experience this production again, which tells a story "between a dream and reality" in a medium that's between a dance, a poem, a play and a symphony. Learn more about Ballet 5:8 and Scarlet's national tour at www.ballet58.org.
Posted by Jeffrey R. Pierce No comments:

The memories of women who survived the Vietnam War are brought vividly to life in Shirley Lauro's 1991 play A Piece of my Heart suggested by the book by Keith Walker, performed by Elgin Theatre Company Saturday night at the Elgin Art Showcase.

Written in documentary fashion, consisting of scenic vignettes divided up by monologues and music, Piece is a scrapbook of situations experienced by a collage of characters that suggest the range of capacities in which women served in the war: nurses, relief workers, entertainers and soldiers. Every woman had a distinct personal story, and many volunteered as a means of escaping the social constraints of pre-feminist, mid-century America. Once they arrive "in country," however, the alternating horror and monotony of daily experience drives them to escape to booze, drugs and rock 'n' roll. 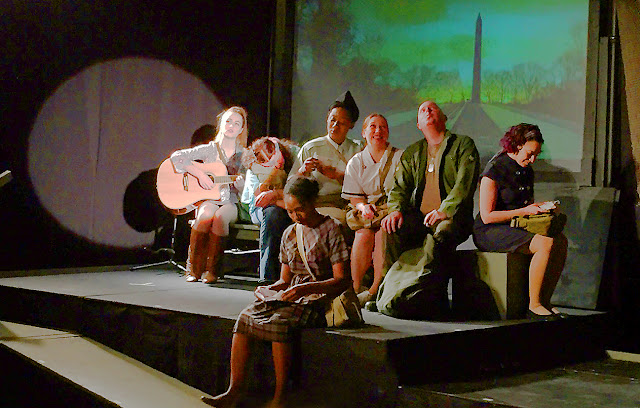 Rather than develop each individual character in the cast of seven, the play often uses them interchangeably to stand in for generic people and voices of The War. In fact, the only male role is simply that of "The American Men," played by Mark Brewer. As "Leann" (Angel Novie) puts it when she arrives in Vietnam, "I'm not special. Everybody's here."

During the long first act, the characters become exhausted by the relentless assault on their senses, their ethics and their identities, and feel their humanity slipping away as routinely as the soldiers lose their limbs. When they escape the war to return home in Act Two, they find themselves wounded, once again in a country that seems entirely foreign to them.

A great script becomes an amazing production when the set, the action, and the sound and lighting tell the story as eloquently as the words. Superb interpretation by director Madeline Franklin presents the non-linear material as it should be envisioned: with an abstract set, symbolic costumes and minimal props.

In roles that border on "performance art," the cast gave inspired performances, shifting smoothly in and out of multiple characterizations, going from panic to intoxication, breaking into song, resetting the stage, never missing a cue or an entrance. Libby Einterz ("Martha") and Elizabeth Dawson ("Whitney") rose above the script in delivering key lines that may have been overwritten but were not overacted.

Kiara Wolfe ("Sissy"), Jamie McCalister ("MaryJo") and Marixa Ford ("Steele") added to the excellent talent that keeps Elgin Theatre Company still fresh after more than fifty-five seasons on stage. A Piece of my Heart closes with three more shows, Feb. 16th and 17th at 8 p.m. and Feb. 18th at 2 p.m. at the Elgin Art Showcase, 164 Division Street in downtown Elgin. For more information, go to www.elgin-theatre.org.
Posted by Jeffrey R. Pierce No comments: