Janus Theatre Company: How Do We Talk About Race?

"Public dialogue is never real dialogue," says Dean of Students Sara Daniels, played by Tricia Miller Hewson. It's one of many powerful observations made by "Spinning Into Butter," a 1999 play by Rebecca Gilman, directed by Richard Pahl and produced by Sean Hargadon of Janus Theatre Company. The play opened Friday at the Elgin Art Showcase.

It's a continuation of Janus' season-long series entitled "Inspired By ..." which attempts to understand, through theater, the creation, debate and removal of Elgin's "American Nocturne" mural in 2016. "Spinning" addresses the question, "How do we talk about race?"

In a series of scenes full of lots of private dialog, a small New England college struggles with its response to incidents of racial hostility. Art truly imitates life in this play: there's lots of words and not much action, and public remarks on racism make an all-white audience rather uncomfortable.

A 360-degree stage setup made beautiful use of the space in keeping with this company's up-close style, and the face-to-face audience arrangement added depth and meaning to the script. The brisk and often tense lines were generally easy to hear and the lighting and sound where excellent in design and execution.

"Spinning Into Butter" leaves us with unanswered questions about race and more. Do we create a false "otherness" by recognizing individuality? Does our class membership determine what we're allowed to think and say? Is justice possible in a diverse society? But two things this play is sure of: generalizing about racism is as bad as generalizing about race; and authentic dialogue must be private and intentional.

You can participate in the public/private conversation by seeing "Spinning Into Butter" Fridays and Saturdays at 8pm and Sundays at 3pm through March 25th at the Elgin Art Showcase. For tickets and more information, go to www.janusplays.com.
Posted by Mark Averill No comments:

EYSO and The Things You Learn from "Water"

Getting sixty kids and teens together in a room to sit still for five minutes would be a challenge. Getting them to play a movement from Handel's Concerto Grosso Op. 6 No. 1 — without a conductor — defies belief. It happened on the Blizzard Theatre stage Sunday as the Elgin Youth Symphony Orchestra presented "Water," the latest installment in its 2017-2018 season titled "Elemental: What Natures Tells Us About the Orchestra."

That's just the beginning of what is possible when the dedicated artist-educators of EYSO entrust students with a performance they have thoroughly contemplated and rehearsed. Then, the first and second violin sections stand up and trade places for Deep River, the African American spiritual arranged with complex harmonies and expressive phrasings, followed by a dance movement from Ginastera's ballet Estancia, during which they stand and play directly to the audience. The depth of cooperation and concentration add a sincerity that elevates the music from a recital to a statement about the expressive potential of a sensitive group of (young) people.

Most music students are never asked to consider the creative possibilities within a single sustained chord, or the artistic challenges of one slowly played note, but those questions were abundant in Eric Whitacre's Water Night. The power of careful listening, emphasized in remarks by conductor Andrew Masters, was tested in Anton Arensky's Dream on the Volga Overture, Op. 16 which explored the full sonic capabilities of the orchestra. This season marks the first time some of these students have ever played with winds and strings together; for others it's a communication breakthrough when they see and hear the audience respond to their playing.

For generations, organized youth sports have been considered the best place to learn teamwork and loyalty, and to develop excellence from a little bit of natural skill and an honest work ethic. Perhaps a better place is youth orchestra, where all of those values are modeled in an art form that touches upon every part of human conscience and culture.

The EYSO offers opportunities for young musicians of all abilities. Placement auditions for the 2018-2019 season will be held May 31-June 3, 2018. Find out more at www.eyso.org.
Posted by Jeffrey R. Pierce No comments:

How the Heartland Voices Twisted the Night Away

A large musical repertoire is a credit to any choir, but the talent and courage to perform it with costumes, dance and comedy sets the Heartland Voices apart from other area vocal groups.

Just one week ago, the Voices appeared in formal dress in the sanctuary of First United Methodist Church, performing two sacred works accompanied by organ at the "Bach Around the Clock" event. Conducted by Artistic Director Dr. John Slawson, this is the choir you may know for its full, balanced sound, with crisp articulations and musical control.

Many of these same singers took the stage at the Kimball Street Theater to present "Twistin' the Night Away," a cabaret-style revue of music from the fifties and sixties. Accompanied by a tight three-piece band, they recreated the sounds of the Andrews Sisters, the Four Seasons and other memorable voices of the era in solos, trios and various lead-and-backing vocal arrangements. 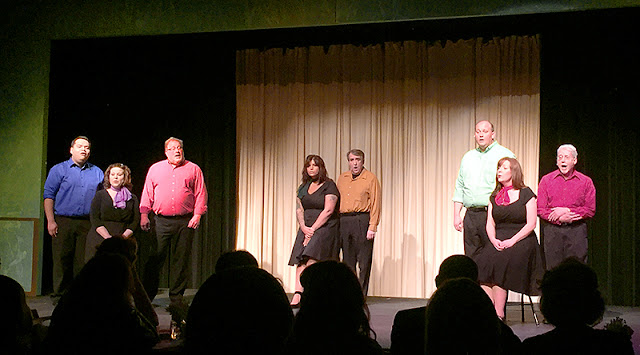 Of course the music was good, but to see this sophisticated ensemble transform into a show choir was remarkable. In groups of three to eight, they executed modest but effective choreography by Konnie Kay Sherry, and solo performances sparkled with humor and personality. Enhancing this depth of talent, the first rate lighting and sound gave this show a professional look.

As guests of honor, David and Sandy Kaptain were recognized for their efforts in helping develop the cultural life of Elgin into an important part of its civic identity.

The Heartland Voices have played that role as well, offering eighteen years worth of proof that local talent combined with professional direction in a nicely equipped venue can produce affordable art and entertainment experiences that are the envy of northwestern Chicagoland.
Their next concert series entitled "She Writes the Songs" features the work of female composers, lyricists and poets. You can hear them April 20-22 in West Dundee, Elgin or Batavia. Find out more at www.heartlandvoices.com.
Posted by Mark Averill No comments: