Thank You So Much For Coming at Elgin Fringe Festival

Note: the views expressed in this review do not necessarily reflect the opinions of the editor or publisher of The Elgin Review.

Bonanza! This show has everything you love about perceived reality: song, dance, surveys, talk shows and headline news! It's called performance art because it defies standard classifications.What do you call a piece that begins with an audience assessment and ends with a campfire?  It's called "There Will Be a Test." 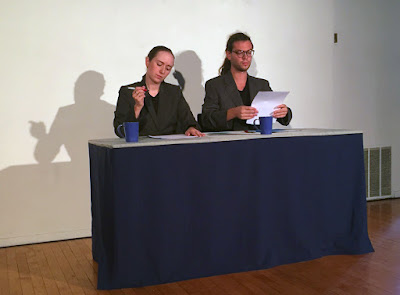 By way of a series of vignettes without clear boundaries, you'll travel from slow motion talking heads to a talking body to singing cowboys, and discover that reality is absurd at both extremes of space and knowledge. But fact, fallacy and fiction have one thing in common: it's all great material.

If it were possible to create a didactic piece of art whose agenda was the anti-agenda, it might look like this. And if the thing you remember most about a performance is the ending, then when Dad says it's bedtime, you trust him.

"This just in: Objectivism has been downgraded from Threatened to Endangered."

Maddy and Scott of Thank You So Much For Coming are just what this Fringe Festival needs. If only they had one more segment on Sunday ... but it's so hard to capture the 18-54 demographic in that time slot when the NFL is on another channel.
Posted by Jeffrey R. Pierce

Email ThisBlogThis!Share to TwitterShare to FacebookShare to Pinterest
Labels: Elgin Fringe Festival, Thank You So Much For Coming, Theater at Side Street Studio Arts