The word "nevermore" calls to mind the one-word vocabulary of the Raven in Edgar Allan Poe's narrative poem of the same name. It's emblematic of Poe's life, which is best known for its endings rather than its beginnings. 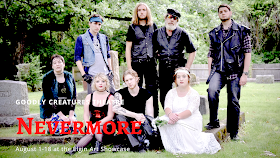 In "Nevermore," the original theatrical adapation of several of Poe's poems, the cast of Goodly Creatures portrays a gang of outsiders with rough exteriors that conceal their complicated consciences. The two act play was written and directed by Katrina Syrris, Founder and Artistic Director of Goodly Creatures, who also appears in a minor role.

The floor of the Elgin Art Showcase is set up in borderless vignettes where characters transition in and out like the persons in a dream. Their relationships are gradually exposed through monologues that borrow the direct text of Poe's poetry, including "The Raven" and many lesser-known works.

The characters are constantly self-medicating as they share their fears, grief, and gothic fantasies in period verse, which adds to the illusory quality of the sixteen short scenes which are emotionally and sometimes physically raw.

A few syllables get lost in the crying, whispering or drunken mumblings, but the key storytelling is in the action and excellent costumes and set. Although Poe had a (somewhat undeserved) reputation as a sullen or angry drunk or even a madman, he loved puzzles and hoaxes, and the cast injects glimpses of good humor that provide welcome relief from the literary syntax and heavy imagery.

And like Poe's life, "Nevermore" can also be seen as a sequence of endings, daring us to wonder what may come next. At times, you'll experience Poe-esque confusion and intrigue at what you're seeing and hearing, but let your imagination supply some of the material for this fable, just as his own characters did.

And yes, even intoxicated people can say some pretty amazing things. Check out "Nevermore" through August 18th, with showtimes at 8pm Thursday through Saturdays, and 2pm Sundays at the Elgin Art Showcase, 164 Division Street in downtown Elgin. Advance tickets are $15 ($12 seniors/students), available at goodlycreatures.com
Jeffrey R. Pierce
Share