The title shot is of a beautiful old church, with the camera tilting down from the steeple to the steps, where three dancers are standing outside the large wooden doors. It's a powerful statement about art, a legacy, and deep roots in a particular place. 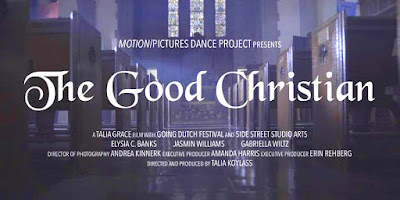 This is the opening sequence of "The Good Christian," a dance film by Talia Koylass and Motion/Pictures Dance Project that was screened for the first time in front of an audience Thursday at Imago Creative Studios. It officially kicked off the Going Dutch Festival, a dance-centric "celebration of the female voice in dance, music, theatre and the visual arts." Going Dutch, now in its eighth year, is based in Elgin with events and live performances in multiple downtown venues.

The action begins with a long shot down the center aisle of the church sanctuary. Three dancers clothed in black work through closely measured movements in front of the altar. Though not entirely predictable, the dance is ritualistic at first then reveals moments of weakness and frustration. As the camera dollies in closer over a sound track with unintelligible foreign language lyrics, it becomes clear that the ensemble is tightly knit and will not leave the chancel, an area traditionally off-limits to all except the clergy.

A second sequence consists of the dancers viewed from the pulpit, positioned separately among the pews in the darkened sanctuary, dressed in street clothes. The movements are more protest than praise or prayer as the music shifts to lyrics like "God, why must I suffer?" It's a scene that speaks of a shared experience of inner conflict and personal isolation.

But the message is ultimately one of good news, as the dancers reappear in flesh-colored leotards, making free use of the entire church space. The movement is beautifully human and unapologetic as the music introduces lyrics of empowerment with a refrain of "this what God feel like." The final shot is a long dolly out, with the individual artists connecting like dots from the altar to the aisles to the pews and ultimately into the street.

The piece couldn't be titled anything less, because Christians believe Jesus came to Earth to begin the work of reconnecting people directly to God, as proclaimed by the banners seen in the wide shots: "Son of God" and "God with Us." The Church continues this work, and after centuries of reform, it is becoming more humane and democratized. Historically disadvantaged parts of society can find powerful and transformative redemption in Jesus' universal message of salvation.

At times, artistic expression is like the ancient spiritual practice of speaking in tongues: not everyone understands the language, but those who do, hear truth. The language, sound and visualization of "The Good Christian" are a beautiful composition on their own, and the fusion of film and concert dance is brilliant for at least two reasons.

First, unlike performance in front of a stationary audience, a filmmaker can use angles, perspective, and shot-framing as effective creative devices, and make the quality the same for all viewers. Second, the recorded medium means the art can be reexperienced many times. This is the kind of piece that takes on more meaning with successive viewings, a luxury not afforded to many live dance performances.

Rescreenings of "The Good Christian" are set for 9:30pm Friday at Side Street Studio Arts (15 Ziegler Court) and 2 pm Sunday at the Elgin Art Showcase (164 Division Street). You can meet Talia Koylass and dozens of other artists as the Going Dutch Festival continues through Sunday. Day passes include multiple live performances, talks and classes. A complete schedule can be found online at www.sidestreetstudiosarts.org
Jeffrey R. Pierce
Share